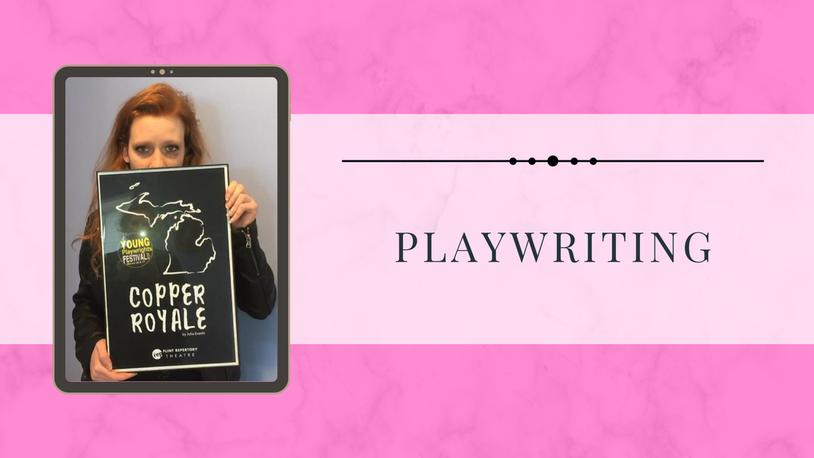 We’re going to laugh, cry, cower in fear, think, and escape from our everyday lives.

My plays span a wide variety of genres, themes, and topics. I have written thirty-four stage plays and had a variety of productions, readings, and more over the years.

Look at the media below for details about these presentations of my work, or scroll below for short descriptions of all my plays!

Check out my work on New Play Exchange! https://newplayexchange.org/users/23789/julia-everitt 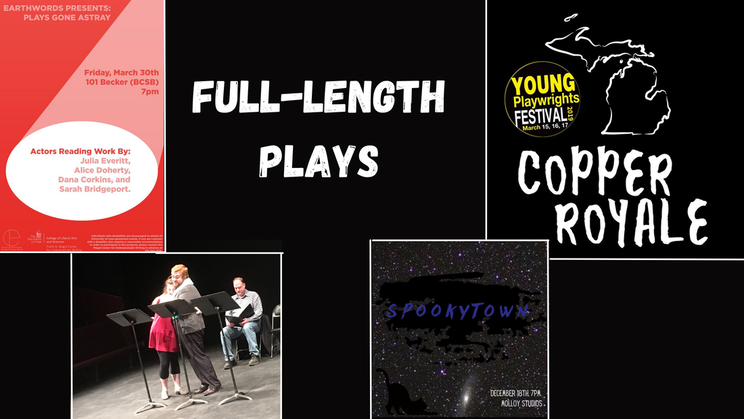 A Plot to Destroy Them All
When emails from the Russian government find their way into Oli’s hands, Oli does the only thing they can think to do about it… tell their equally incompetent friends. Oli, Niki, Zoey, and Leon must find a way to save the world from nuclear war after receiving emails that the United States will be nuked in just three days. But how can they save the world? Building a bomb? Flying to Russia? Brownies? Fake cigarettes? The possibilities are impossible.

Copper Royale
Mysterious events plague two separate copper mining missions, one in 1847, and one in 2017. Where could that roaring and these bizarre copper scales be coming from?

The Wolves Are Hungry
Clarence and Britta must find a way to survive and find civilization while lost in the savage woods after the apocalypse.

Spooky Town
Laughter rates have gone up in town since Y moved here. But only X and Z seem to notice.

Unplanned
In Iowa, a bill has been signed and subsequent law enacted banning abortion after the fetus has a heartbeat, typically at only 6 weeks into the pregnancy. What will the Michelle do when she discovers her unplanned pregnancy and both inability to abort the fetus, and inability to afford a pregnancy, much less a child? She’ll go to any lengths to solve her problem, even going above the law…

With A Swish
An all-female sword fighting society’s initiation test may be rigged and it’s up to two rivals to discover whether their fight for acceptance into the society will be fair. 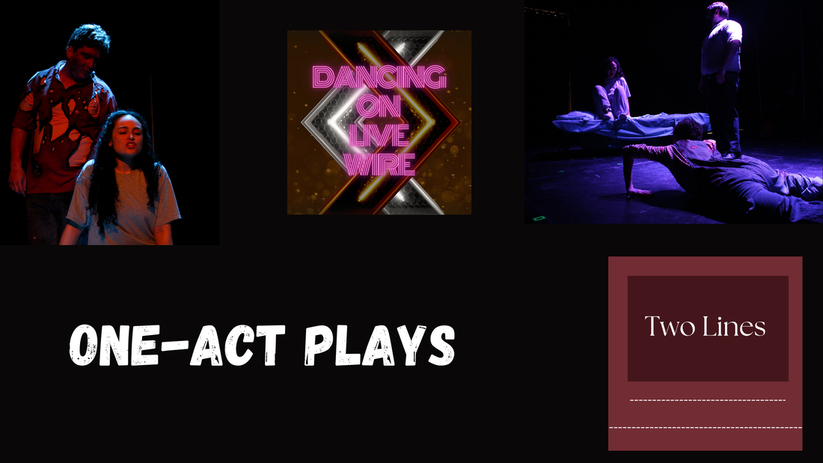 Dancing on Live Wire
Through a series of hallucinations/artistic depictions of drug-fueled trips, we see Chaz fall into drug addiction, and his girlfriend, Beauty, fall out of love.

It Told Me To*
(Co-written by Jazmine Cornielle and Lauren Anthony)
A demon tells Savannah to set her significant other on fire, which lands Savannah in an insane asylum. She bonds with her cell-mate in the asylum, but continues to be plagued by the demon as well as the ghosts of her victims.

Klara
A futuristic take on Robin Hood, where the Robin Hood figure is a little more willing to poison people.

Moonlight for Roses
A comedy about love and miscommunication. 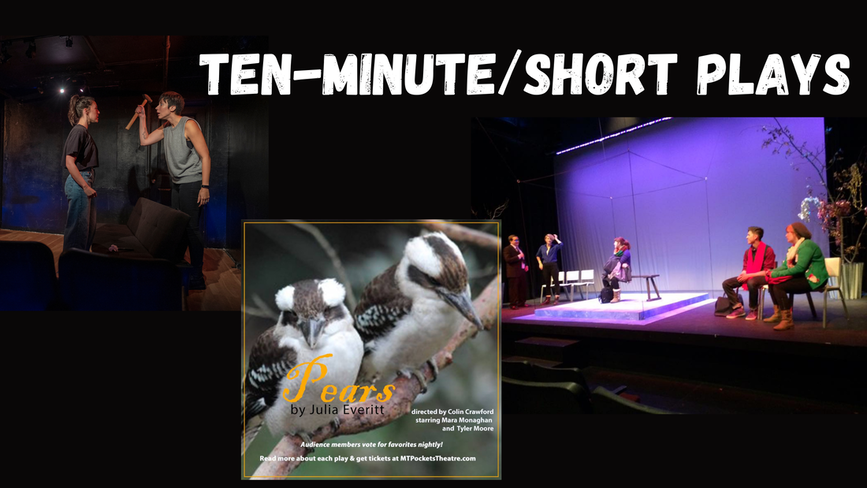 Caljivi
Between trying to pick a good name, and battling some aliens, discovering a new planet is hard.

Fire Escape
Two exes have an honest conversation on a fire escape.

Through the Door
Childhood innocence must withstand the tests of adulthood’s pessimism as Curtis is asked to PICK A DOOR.

A Lovely Day
Sometimes “accidentally” summoning a demon to kill your sister and in attempt to rule the world doesn’t go well.

Bye Bye Ashton
Murder is never as easy as it seems.

Up and Away
A hot air balloon, meets a scheme, meets a thunderstorm.

Open Doors
A parody of my own writing- characters are thrown into an unknown world with too many doors and seek to discover what is going on.

Round and Round
A Samuel Beckett inspired fourth-wall breaking, existentialist moment, with lots of somersaulting.

The Magic of Hello Hello Hello
When you have so much in common with someone the universe won’t let the two of you escape one another, but maybe that’s a good thing?

In the Cards
The tarot cards predicted death, but that can’t be right.

It Happened
SHE gets a text from HIM that he is killing himself, after encouragement from HER, SHE goes to check on HIM, but such things are never simple.

Robber Bridegroom Retelling
A classic Grimm fairy tale, retold as a play with multilingual birds, and a stronger female protagonist.

I Feel Small
A play inspired by the #metoo movement.

Down to the Wire
Will Ella finish her project in time? But don’t forget about the camels! 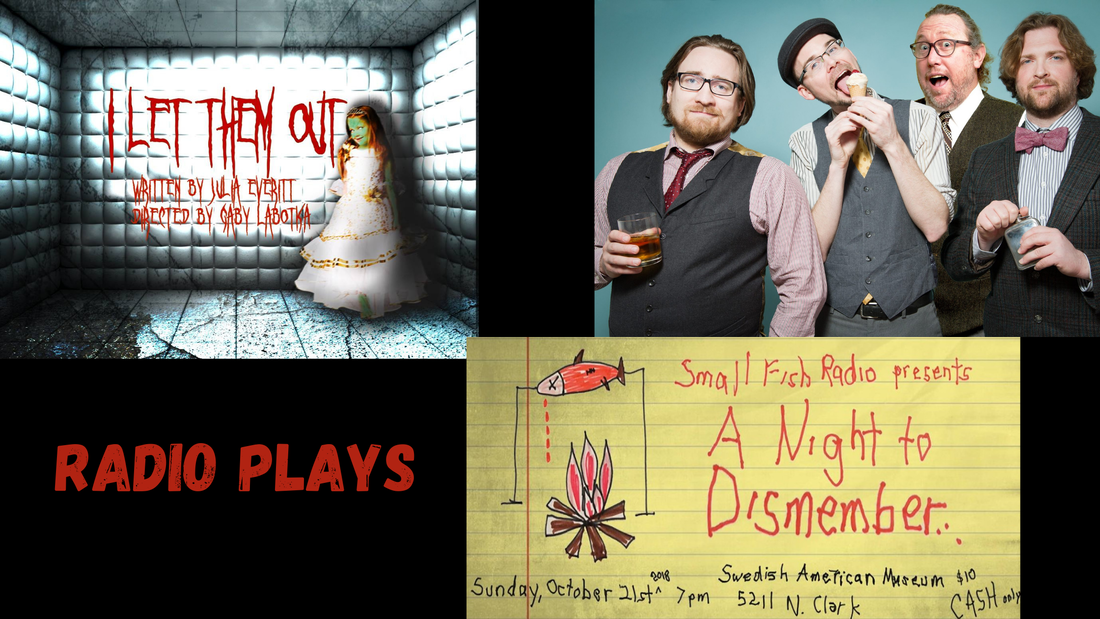 I Let Them Out
The little girl let the demons out, and now you’re alone with them.

The Phone Booth on Sixth Street
Who is that mysterious voice coming from the old phone booth?

The Bubak
Scarecrows don’t move… but the Bubak does.

On Fire
What will Lacie do when a demon comes to her in the night and tells her she must set someone on fire?

​Baggage Claim
Poisonous bugs and beasts cause problems for an attempted jewel robbery in the airport.